App updates that are fun to read

App update is a place that people hardly pay attention to. It is mostly filled with a long list of bug fixes and new features that are similar to the product backlog of product development sprint. Maybe it is the product manager that writes the copy, which includes common key words such as:

It’s not about being interesting

The main problem with highly technical copies is that they are hardly read by user, which is unfortunate since users do need a reason to press the button Update. The feeling of owning something better when pressing the button is being ignored. Is it because it take less than 1 minutes to update the app so no user bother reading it?

Developers push updates with new features, which rely on user on-boarding to be introduced to users. People spent a big budget on on-boarding new user and user retention while skipping one of the most cost-effective place, the app update.

In (content) design, the aha moment can come at the time and place that no one else has ever thought of or no courage to venture in.

The blend of information and personality

I love app updates that are playful and engaging. For example, when you are a StarWars fan boy, you can feel the awesomeness in this brilliant copy from Hipmunk. Darth Vader was mentioned!

Hipmunk personality is always fun and witty. It makes me think H in Hipmunk stands for Hipster. Pay attention to their choice in copy: 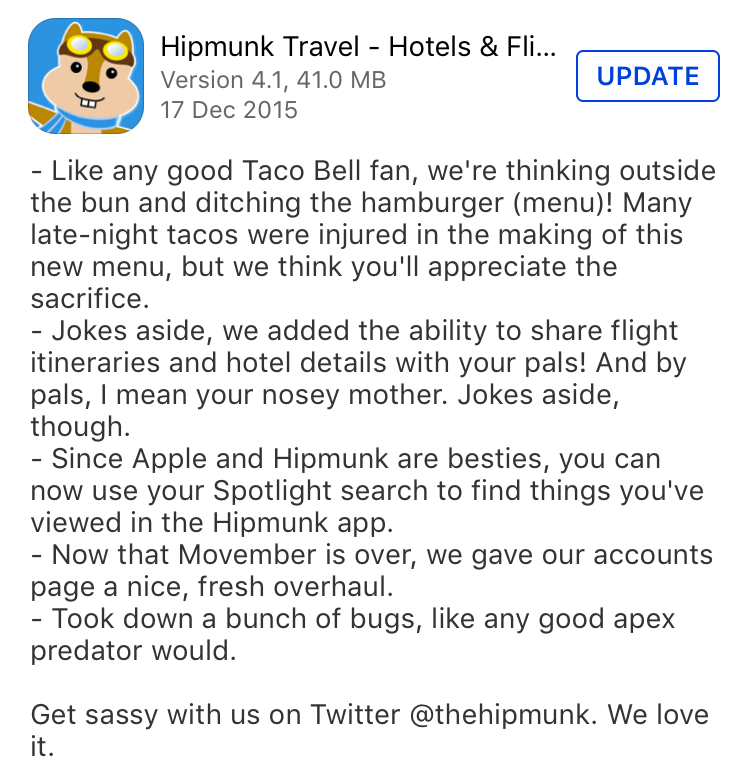 Using a different approach, Medium gave little exercise to your brain and introduced important changes at the end. They sure love Scramble.

Medium app updates have a consistent sense of humour with stories. The summary of new features and changes at the end is always helpful. To me, Medium has this cool vibe that welcome people to update the app with ease of mind.

And this was their gift for Star Wars fans as well. 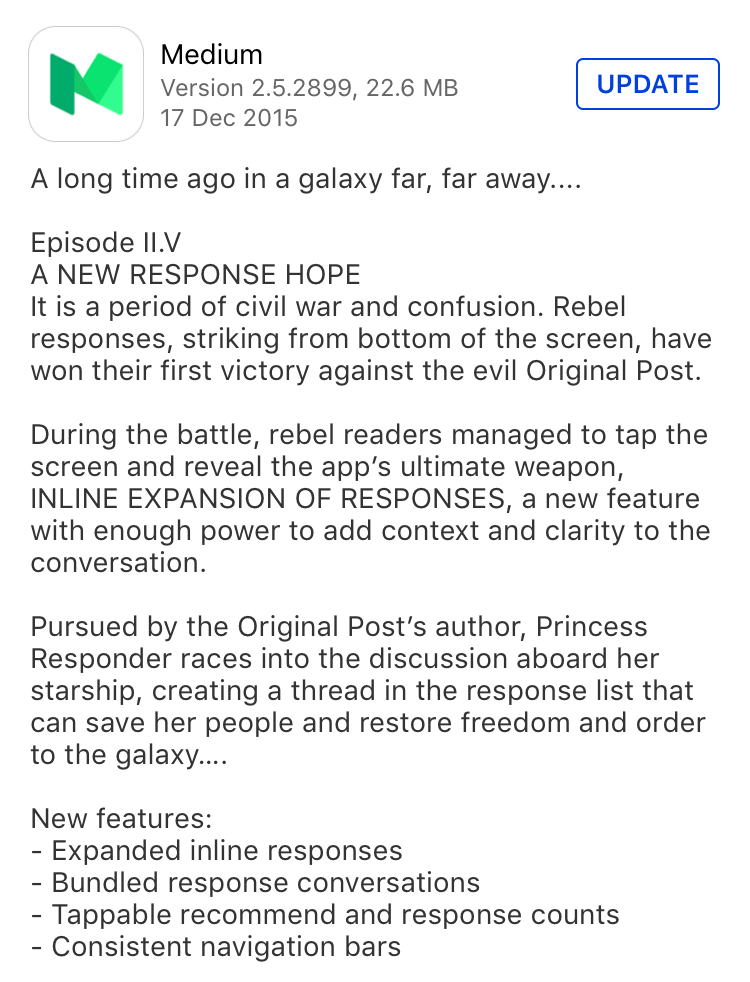 Someone was cooking and writing this update. I guess Medium may have different people writing app updates. Otherwise, who is this cool person? Must be someone love cooking, telling witty joke and a Star Wars fan.

I love using Tumblr app update. It has the best update with Friends stories. I can immediately see that the update was to support iPad Pro, fix bugs, and smooth animation. A nice blend of humour and important information.

I hope to see frequent update of these apps so that I can read the copy. App updates can be fun, even when they are to inform the user of new features and changes. People do read it.

A moment before pressing Update

Maybe after reading this article, you will start checking the updates one by one instead of pressing “Update All”, which will remove all the excitements.

If you see any fun app updates, please let me know.

Many apps have engaging copy in the updates. Following apps (on iOS) are mentioned in the comments by readers:

Start with Objectives, not Problems

We are usually given problems to solve, which might make understanding problem further appealing as the immediate step. What we want to start any project with should be objectives.

Sometimes, if you do not begin at the end, you end at the beginning. I have learnt many lessons about this and decided to share those in this blog post.